The kickin'-est thing I saw today.

I was stuck on a slow-and-go bus out of downtown the other day, thankfully this guy was walking in tandem to entertain me: 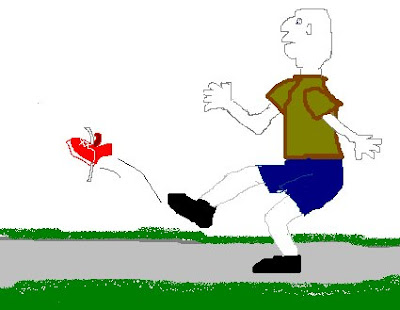 He kicked that shoe steady-on for a good 4 blocks before the bus finally broke free of the downtown stop and go bubble.

Do you suppose he was trying to understand someone better by walking a mile kicking their shoes? Or was he breaking a shiny new pair of sneakers in?
Posted by Missy at 8/28/2008 5 comments:

Labels: Minneapolis, On the road, repeat

The No Rush-iest thing I saw today!

I love checking out garage sales, especially on a whim as I drive around town. I am a sucker for signage like: "MOVING SALE!" or "Multi-Family Sale!" and the best is "Estate Sale!". I will follow those signs around and see what kind of treasures they lead me towards.

I saw a sign in my neighborhood the other day that was not nearly as enticing: 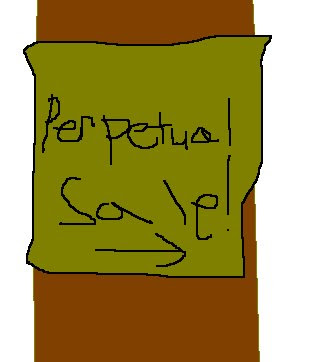 On another note, the Great Minnesota Get Together starts today! Yes, the Minnesota State Fair is now open for business. I love the fair and I hope to find lots of fodder for drawing when I go on Sunday.

If you love the fair too, or if you need to be educated about the MN State Fair, I recommend the blog My Pronto Pup. The mere fact that someone has a year round blog dedicated to the Fair should be a big clue as to how much people here love the Fair. The author is one of MANY people who go every day of the fair (August 21-Labor Day).

Also, I saw this crazy article in the Strib today about a family from NW MN who walked 400 miles to the fair with an ox cart. What?!?!? I am not sure if the pronto pups and cheese curds are THAT good!
Posted by Missy at 8/21/2008 4 comments:

Today is the one year anniversary of the I-35W Bridge Collapsing here in Minneapolis.

I live and work near the bridge, so I have been watching how hard all the bridge builders have been working ever since that day one year ago.

There are people working on the bridge 24 hours a day. They worked through bitter cold in the winter and hot humid days in the summer. There are all kinds of cool trucks and cranes and barges getting things done.

You may not know this if you don't live here, but they have already made the bridge connect across the river: 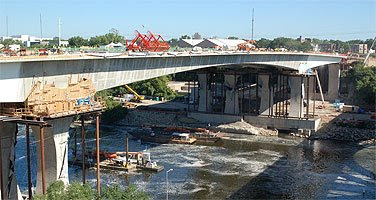 It is scheduled to open in September.

I am very impressed at how fast all the legislators and what not worked to get organized and get the project going, I mean, if they had just decided to replace the bridge it probably would have taken a year just to narrow down a design and decide who would pay for the bridge. am I right? 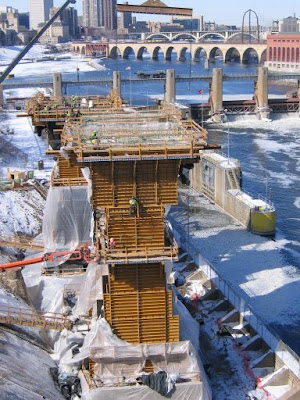 Oh and the people who survived the collapse! They are out of this world. For example, the kids that were on the school bus made this mural together:

The mural is right by my house, so I can go by and think of how brave they are all the time!

Lastly I am proud of the community-at-large for supporting the victims and for dealing with the lost bridge very patiently. If you do not live here, then you probably do not know that this bridge is a major freeway artery and also that a long stretch of freeway just south of the bridge had already been under major construction before the collapse (and still is today- FYI 35W will be closed this weekend between 494 and 94). I have not heard people complain about having to detour around the bridge...but they do complain about the "normal" construction!