The Crabbiest thing I saw at the fair.

The fair is a place of joy and pride in our great state. People show off their best talents and check out what innovations are in store for us in our bright Minnesota future.

Plus, this year they are allowing real beer at the fair (rather than 3.2 beer).

I once had a friend who said "People who wear sweatpants in public have given up on life." A very un-state fair fashion statement.

Does this hold true if you are also sporting a bowler hat and a pork chop on a stick? 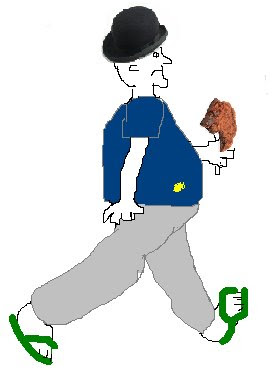 I would not hold the mustard stain against him, most people at the fair are stylin' with a sauce stain somewhere.
Posted by Missy at 8/31/2007 8 comments:

The second coming-est thing I saw at the State Fair.

He looked a bit Iike an older Jesus..... 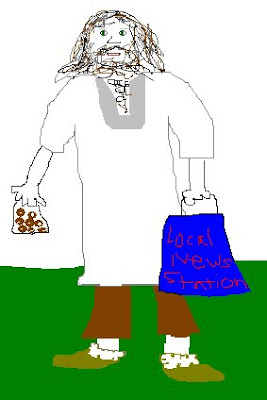 and he was wearing sheep skin house slippers.
I wonder if he stopped by the Carpenter's Union booth to see his buds!
Posted by Missy at 8/29/2007 5 comments:

The Bathing Beautiest thing I saw at the Minnesota State Fair!

The state fair has THE best people watching around. Everyone flocks to Saint Paul to be themselves and eat deep fried food on a stick.

I could just sit on a bench all day and watch the humanity go by! Some people go every day to take it all in!.

I have gone to the fair two evenings this year and I took notes on things to draw for you people. Here is the first installment:

At the fair, I saw dairy princess Princess Kay of the Milky Way and her head carved in butter.

I also saw Ms. Brooklyn Park 2006 walking about with a Pronto Pup in her best evening wear making Brooklyn Park proud! (Jesse Ventura was once the Mayor of Brooklyn Park, so goodness knows they need the good press!) 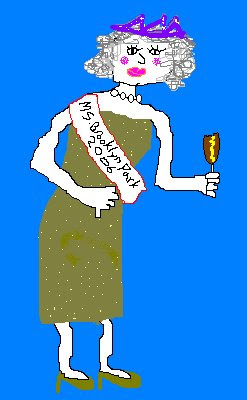 She was without any escort or entourage, so I was tempted to ask for an autograph. I chose to let her be; being a local celebrity can be very taxing, I'm sure.

I hope that Ms. Brooklyn Park is an age 55+ competition, otherwise the stress of the role is really showing on this beauty queen!

Labels: Celebrities, Fashion, Minnesota Sate Fair, When I am older

The Diverse-iest thing I saw today

Walking about the University I saw a man walking about displaying a clutch of cultures, breaking down social stereotypes: 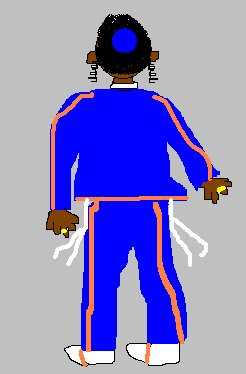 He was wearing a nice jogging suit with matching shoes, a kippah, Tzitzit, and long peyos.

He was just your standard Minnesotan African-American Hasidic Jewish man.

So this is the first MAAJM I have ever seen.

I had seen a Hasidic Jewish Reggae performer before, but he was from New York, and he was white. (He was the first white reggae perforner I had seen too.)

Maybe this guy was not from Minnesota, maybe he was just visiting. I guess I should have asked for his place of residence!

Anyway, I was glad to see someone so proud of and commited to displaying their faith.

Today I helped the "big man on campus" who has long left high school, but still clings to his glory days: 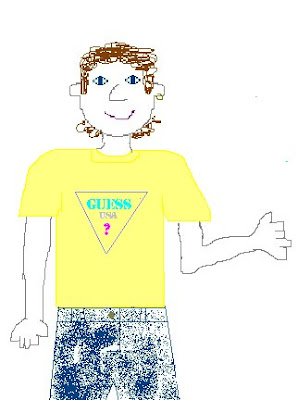 He was so dreamy back then- so Kirk Cameron!

He wore that Guess tee and those stone washed jeans in a sadly non-ironic way.

I am impressed with how the fabrics have held up. He must treat them with Woolite and love.

Or maybe he fell through a time warp, how will he ever return to his true time?
Posted by Missy at 8/22/2007 4 comments:

The Scurvy-est thing I saw today.

While talking a brisk walk through the park by my home, I came upon a man head towards the shore of the tiny lake with an air of determination.

He was dressed as some sea men have been known to dress, he carried a bucket one might take to fish, but rather than a pole, he had a handmade gadget that I am not sure has a name: 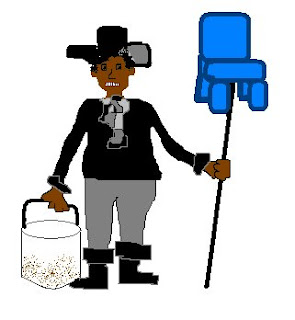 Twas this the Pirate of Powderhorn Lake?!?!!?!?
I knew the neighborhood had riff raff but I had no idea it had gotten this bad!
This picaroon was dressed in pirate boots, a piratey hat, and, I kid you not, a puffy shirt.
Along with the bucket, he carried a black pole with a child sized plastic chair stuck on the end. I have no clue what that is for- perhaps a perch for his parrrot or to tend to the futtocks shrouds?
Posted by Missy at 8/17/2007 8 comments:

The Proudest thing I saw today.

Walking about I saw a proud pair: a Father and Son spending time together. The young lad and his father clearly took pride in each other and their bond, because they wore matching outfits and had matching haircuts: 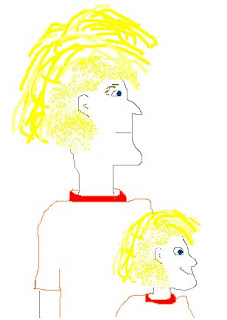 I am not even certain what their haircut would be called.

Their heads were shaved on the sides and the hair down the center of their scalps grew extra long and shaggy.

I suppose they may have just come from the beach or just did not have the time to prop up their extra tall Mohawks or perhaps they cut their hair using a scoop toss device as a guide in lieu of a traditional bowl.

Either way, it is nice to see family members like each other so much! I wonder how long that will last?
Posted by Missy at 8/14/2007 5 comments:

The Primary-est thing I saw today.

En route to the Picasso show at The Walker around 8pm, I spied an older gentlemen crossing Hennepin Avenue wearing his primary colors loud and proud: 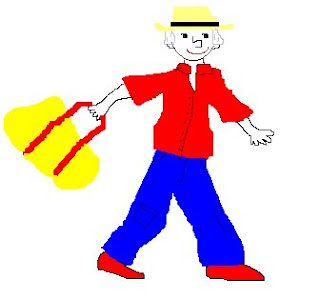 
I thought maybe he was a clown only part way in costume.


Or maybe he was making a statement against blending and merging.

In any case, the big bright yellow bag really tied it all together.


PS: The exhibit made me feel a lot better about my inability to draw human hands!


PPS: I started another blog about Geography: http://belatedgeography.blogspot.com/, if you are interested.
Posted by Missy at 8/10/2007 4 comments:

The safest thing I saw today.

In Minnesota, convertibles are only really useful roughly half of the year, weather permitting. Even so, people still own them and put the top down when they can.

Ah convertibles, symbolic of letting the wind whip through your hair and your inhibitions fly away on the breeze.
I saw a woman riding in a convertible recently who let that symbolism slip by her: 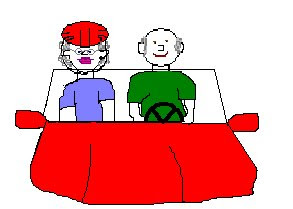 She was sporting a bicycle helmet as she enjoyed her ride.

I am not sure if she understands that bicycle helmets are not meant to protect her were the convertible to flip, but I suppose it gave the her a sense of security and tameness she was seeking.

Labels: Fashion, On the road, Safety

The Shiniest thing I saw today

Each morning as the new sun shines and I walk to my bus stop, I pass by a car that is much adored.

Each surface has been buffed and polished. The white sidewalls on the tires gleam. All the brand logos have been removed from the car; perhaps to make it more "fly" or to prevent commercialism from ruining the genius design of the body itself.

Someone spends a lot of time on this vehicle.

Someone loves it very much.

Some one is very proud of it. 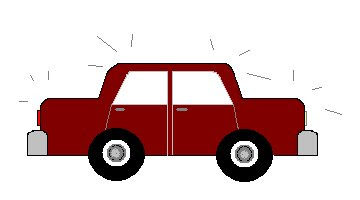 Someone is attached to family life in 1993 because rather than a hot rod or a muscle car, this car is a mid-1990's Plymouth Acclaim.

Seeing such pride being taken over such a simple car warms my heart. I day dream that this was the first car this person bought, or perhaps they are a car enthusiast who is also a firm believer in not taking out an auto loan.

The striking-est thing I saw today

Last night a large interstate highway bridge in my city collapsed during rush hour traffic over the Mississippi River.

As the sun began to set that night and the rescue efforts continued, my husband and I saw this driving up the East River Road (which runs along the east bank of the river) towards the tragic scene: 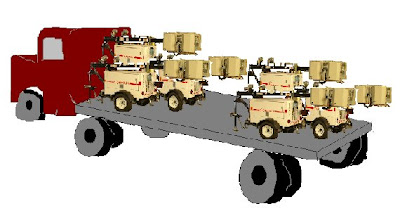 This large semi-flat bed carried multiple industrial lights like this: 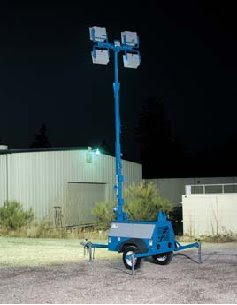 to help light the river while dozens worked to save lives in the crumbled concrete and running waters.

As someone who was lucky enough to be safe at home when disaster struck, the sight of this truck made the unbelievable collapse of a familiar thoroughfare very real to me.

Thankfully all of my friends and family are safe and were not traveling that route at that time. My thoughts go out to all those affected by this and all those helping with the aftermath.
Posted by Missy at 8/02/2007 2 comments:

Labels: Minneapolis, On the road

The excuse-iest thing that I have for you today