I was down at the Mayo Clinic yesterday to see a relative. There we were, just a-waiting in the waiting room and in came one of my favorite Minnesota heroes: 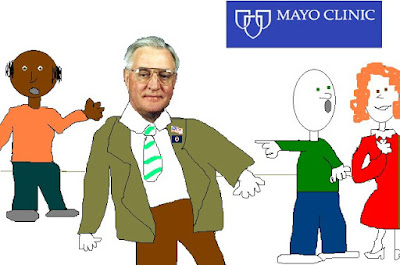 Walter Mondale was being seen in the same office!

You know, the former Vice President to Jimmy Carter? The one portrayed as a janitor and the namesake of a laundry ship on The Simpsons?

Poor Fritz, he can't go to the doctors office without being gawked at and poorly drawn by his fans!

My relative is still down there and today the Dalai Lama was there for his check up. My family knows how to draw in the world leaders!
Posted by Missy at 4/16/2008

How very cool! Did you say hi? You've been tagged

That is too cool for words.

"and poorly drawn by his fans" - best line ever!

Oh excellent! I think I'd be stalking the DL though!

Gotta get some of his good karma!

First of all, I hope your relative is ok. Second, was Mondale really wearing that outfit? If so, he's THE MAN! Third, your airport serial should win some kind of award. Seriously.

Aw, doesn't it suck to be a celeb? Can't even get a colonoscopy in peace. JK

The game of choice has been Apples to Apples (have you played? I never had. It's a word game -- so much fun!)

And about my million and a half: You know the sad part is that I never got any oreos! :(